What does the perfect body for all around athleticism look like?  Is it big and powerful like an Adrian Peterson? Thin and wiry like a triathlete? Or something in between?

How do you even define athleticism?

Most would say all around athleticism is the summation of individual athletic traits, such as strength, speed, endurance, agility and coordination.  To find the best athlete one could then test an individual on each of these variables and come up with some numerical output to determine their athleticism. But are we to give equal weight to each variable? How should we determine the relative importance of flexibility and strength? Should they be equal, or is strength more important than flexibility? What about endurance versus top end speed? This kind of analysis is just too messy, and it leads to too much subjectivity.

A more concrete way to find the best athlete would be to have athletes compete against each other in every individual sport in the Olympic Games. By competing in every single event, the athletes would be tested on all facets of athleticism, from pure power in the weight lifting competition to the ultimate endurance in cross country skiing. Now, getting athletes to do this is impossible, but can we imagine what kind of athlete would come out on top in this challenge?

Would it be a large, powerful competitor such as a football player? A smaller, more coordinated gymnast?

Another way to think about who would be the ultimate all around athlete would be the following competition. Imagine that the name of all the Olympic sports were thrown into a hat, and you had to pick out a sport at random. It could be rock climbing, it could be the half pipe in snowboarding or it could be the pole vault.  Without knowing what sport will be chosen, what size athlete would you want to compete in the mystery event?

One way to test this is to find out the average height and weight of a male Olympic Gold medalist.

The assumption here is that by taking the average height and weight, our hypothetical average athlete would be competitive in the widest variety of events, and hence win our challenge.

The mean height and weight of a male Olympic Gold medalist from the last two Olympics was 5’11.75 inches and 176.4 pounds.

The median height and weight of a male Olympic gold medalist was 6’0, 173 pounds.

I imagine that this is a lot smaller than you were expecting when you were picturing the perfect human athletic specimen. Perhaps you were thinking of someone like Lebron James or even the hulking Brock Lesnar. But how would Lebron or Brock do on a mountain bike? Their huge physiques would be an enormous disadvantage.  To be an all around athlete, carrying around too much mass is a hindrance to endurance activity.

You can’t have it both ways, you cannot be super strong and have super endurance, there is a balancing act between the two. That is why marathon runners weigh 120 pounds and the strongest weightlifters up near 300.

My analysis of the perfect athlete comes dangerously close to the top performer in the sport marketed for producing the world’s greatest athlete. The Decathlon. This year’s gold medalist, and world record holder in the decathlon is Ashton Eaton. 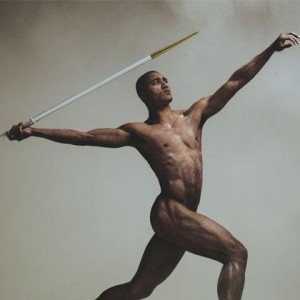 Other athletes within this range include.. 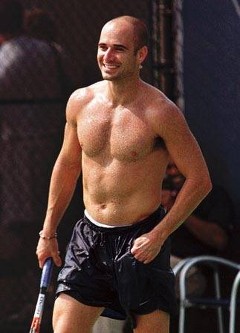 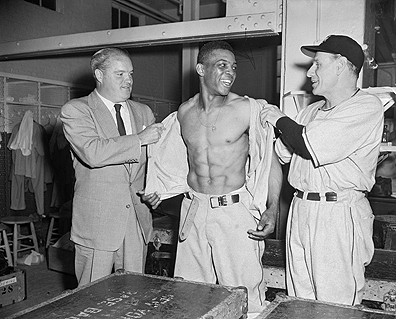 Notice that Eaton, Agassi and Mays all have lean, muscular physiques. They are strong, but not overly powerful, they look like they have a solid amount of functional strength, but still have the endurance to push themselves for hours on end.  In contrast to your average gym go-er with bulging biceps and chicken legs, they are well proportioned, with strong legs, thick cores and toned upper bodies.

Does this kind of build make sense from an evolutionary perspective?

Of course it does. Our ancestors certainly had to be strong in order to carry large game, firewood, buckets of water, and perhaps fight off any rivals.  But endurance mattered as well, sometimes hunts would last for days. That is dozens of hours of non-stop walking and tracking game. Hunter-gatheres had to be strong, but they had to be lean and fit as well.

Is it just a coincidence that the lean muscled body of a hunter-gatherer resembles that of our perfect athlete? 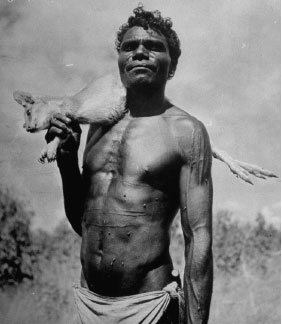 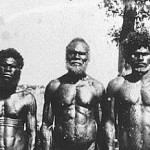 *I eliminated team sports (One can’t compete 1 on 1 in soccer). For Sports with built in weight classes, I took the Super-Heavyweights, seeing as they are likely the strongest competitors and more often than not win an absolute division title (although this isn’t always the case…it’s certainly conceivable that a heavyweight or even light heavyweight could beat a superheavyweight), but let’s err on the side of caution here.

One Reply to “The Perfect Athletic Build”