There is a lot of confusion about cholesterol levels and human health.

Is your Dr. recommended level of total serum cholesterol under 200 justified?

Is this result replicated in other studies? Apparently yes. In a study done by the Japanese they found that patients with total cholesterol levels between 200-219 were the least likely to die. The optimal LDL level was considered between 120-139.  A standard lipid profile you get during a routine check up will tell you that having a LDL level of under 130 and a total cholesterol level of under 200 is ideal, but that doesn’t seem to mesh with this data. 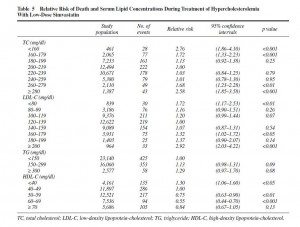 In Conclusion: These are only a few studies, and I am sure there are probably other studies with different results.  But at the very least one has to wonder whether or not the relationship between cholesterol and heart disease is really as scary as people make it out to be. There in fact have been a plethora of books on the subject lately that argue that relationship between cholesterol and heart disease is a myth. I’ll tell you one thing, my total cholesterol level at my last check up was 212, and I’m definitely not worried about. It may even be ideal.