I had a great time talking with Mike De Vivo of the Vivo Training Systems Podcasts. He’s a personal trainer with a natural lifestyle bent. We talk about my background, how I came to eating Paleo, visiting an Amazon tribe and tips on meditation and living naturally. Check out the conversation here..

Listen to “The Awakened Ape: Jevan Pradas” on Spreaker.

If you believe that the feminists of the 1900’s introduced sexual equality you are not alone. You would also – according to several scientists – be mistaken.  Anthropologists claim that women and men were treated equally in hunter-gatherer societies, and it wasn’t until the neo-lithic period and the dawn of agriculture, that society became sexist.  If this is true, then men and women were considered equal for most of the history of mankind.

Much of the research into sexual equality was done by observing modern-day hunter-gatherers.  Anthropologists Mark Dyble and Andrea Migliano added some computer modeling and genealogical data to prove a very clever hypothesis.  The inspiration for their research seems to have sprung from the main-stay of stand-up comedians  –   in-law jokes.

Did the anthropologists imagine the following conversations?

Him – “I think we should live with my family.”

Her – “Are you kidding? Your mother always criticizes the way I cook.  We should live with my family.”

Him – “Hah!  Your brother has a really annoying laugh.  He even laughs when he eats and his food sprays out of his mouth. It’s disgusting.”

Her – “Better than your stone-faced sister. She has no sense of humor t all.”

Her – “Okay, fine. We won’t live with either of our families. We’ll live with people who aren’t related to us.”

Perhaps, perhaps not. But they did work on the assumption based on the research, that individuals want to live with their own families and not with their in-laws. In male-dominated societies, people tend to live with their male relatives and vice versa in matriarchal ones. They found that when both partners had the same influence in making decisions, the groups consisted of more unrelated people than when only one partner was responsible for making decisions. Based on this finding, the anthropologists extrapolated that since hunter-gatherer groups live with mostly un-related individuals their societies were egalitarian in regard to gender and both men and woman had input when deciding with whom they would live.

According to Dylbe and Migliano this ‘no-win’ result led to cooperating with others, less inbreeding, and fostered wide-ranging social networks.  Then, when agriculture came along, men starting saving resources, and eventually the egalitarian hunter-gatherer society broke-down, along with sexual equality.

Have you ever wondered whether you have what it takes to go on retreat in the wilderness? Well the Buddha has some advice for you, which description do you match?

Russell Westbrook is having an historic NBA season.  The Oklahoma City point guard is averaging 31.8 points, 10 rebounds and 10 assists per game. That’s right, he is averaging a triple-double. A stat line that was thought to be impossible in the modern NBA. The high flying guard also eats a clean diet that is almost completely paleo. His only vice..cheese. But hey, if you can handle dairy, full fat cheese is one of the most nutritious foods out there. Here is Russell’s daily diet, which was outlined here.

And here are some highlights from the most athletic point guard to every play in the NBA. The Tsimane tribe, natives of the Bolivian Amazon have the healthiest hearts ever to be extensively examined by researchers, according to a new study published in The Lancet. The Tsimane have lower rates of blood pressure, lower heart rates, lower cholesterol, and lower blood sugar than the rest of the world.

The researchers traveled to Bolivia to study this tribe and found that 85% of them had no arterial plague, and hence, no risk of heart disease.  A further 12% had low risk, and only 3% of the tribe had moderate or high risk. Even those over the age of 75 were mostly risk free. How does that compare to people in the United States? 50% of us are in the moderate to high risk category.

The Tsimane eat a natural diet of whole foods that they hunt and gather themselves with some farming. Their diet consists of rice, manioc, plantains, corn, nuts, fruits and wild fish and game.

The United Nations came out with its annual report on the world’s happiest countries. There is a new number one, with Norway upsetting the defending champion Denmark. 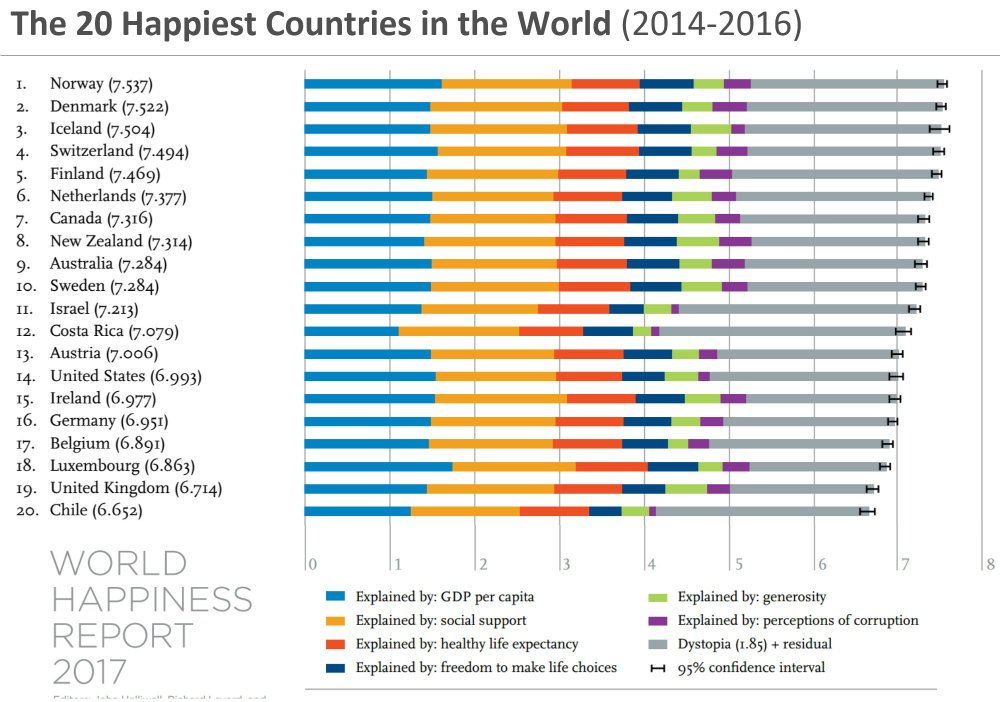 The average score around the world is a 5.3, right in the middle of the happiness ladder. Norway is at the top with a 7.5. So what makes these Nordic countries so happy?

The factors the researchers found to influence happiness were GDP per capita, social support, healthy life expectancy, freedom to make life choices, generosity, and freedom from corruption. The Nordic countries excel in these qualities, while American happiness has dropped in recent years due to decreased social support and increased corruption.

Within countries, much of the happiness between people can be explained by physical and mental health and social relationships.

My book the Awakened Ape is now available on paperback. It’s 280 pages, yet people have been telling me they are finishing it one sitting!

Homo sapiens are regarded as far and away the smartest species on the planet. So much so, that religious people have thought for centuries that man’s place in the universe is something special. Even, that the universe must in some way be created for us. No other species has the control over nature that we do, the tools we use, or our scientific understanding. We are a complete outlier when it comes to intelligence.

How do scientists compare intelligence across species? One way to do this is brain size. While obviously not a perfect correlation, intelligence does correlate to the size of your brain, even between humans. So who has the biggest brains in the world? Whales. Ok, just looking at brain size is not such a great way to measure intelligence, because the larger your body the more brain power needed to control it.  A better measure is what scientists call the encephalization quotient, which is roughly a measure of brain size relative to what you would expect for an animal that size.

Here are the rankings of extant animals species..

Seems like a fairly accurate measure of intelligence right? Now, what jumps out at you when looking at this chart? Dolphins. Woah.

Here is a good TED video on how smart dolphins are.  Research shows that dolphins can problem solve novel tasks, have metacognition- meaning they are aware of their own thoughts – For instance in one study dolphins were able to tell researchers whether they knew something was correct or wrong (“Are these two sounds the same or different”?),  or if they weren’t sure if they were right. Dolphins also have complex emotions, senses of empathy, altruism, and attachment. They mourn their dead. Each dolphin has it’s own individual name.

They also come up with ingenious ways to hunt fish. See here..this is truly incredible.

Q:But Jevan, if dolphins are so smart, how come they don’t have iPhones?

A: Would you have an iPhone if you lived underwater and had no hands? No matter how smart dolphins are, how can they invent complex tools with only fins?

But still, homo sapiens EQ is higher than dolphins, so we still must be the smartest species right? Not so fast, we have the highest EQ of existing animals. But perhaps not of all time. That prize may go to the neanderthals.

Neanderthals were bigger than us back then, which brings down their relative brain-to-weight ratio, but we have gotten so fat that North American males, on average, weigh more than the 77kg neanderthal. So who has the highest EQ of all time depends on how fat the sample of modern humans we take.

The good news for homo sapiens is that neanderthals devoted much of their brain space to their enhanced visual and physical abilities. Modern humans have more brain space devoted to higher cognition and social networking.

We may be the smartest species after all, but it’s not by much. Our vastly superior abilities in tool making and technology come down not just to our intelligence, but to our opposable thumbs (sorry dolphins) and our greater social abilities combined with the large social networks we formed after the invention of agriculture.

The collective human intelligence has sent people to the moon and made iPhones, but no single person knows how to make even a computer mouse. If I threw you in the woods alone and naked, how long before you are sending a text message? Every human is capable of rudimentary tool building, 7 billion people putting their brains together gives us the iPhone. The great difference between us and neanderthals was that they organized in small societies of dozens of people, while we benefit from the collective genius of billions.

Look at this stunning graph showing the correlation between childhood intelligence and Body Mass at age 51. Those with the highest IQ’s were the skinniest and those with the lowest IQ’s were by far the fattest.